‘Living with water in Amsterdam’: a thematic pilot

Within the Amsterdam Time Machine initiative, we started a thematic pilot project which aims to collect, study, organize, and visualize historical data from the city that are specifically related to water. The pilot project contributes historical data and 3D visualizations of living with water in the city to the ATM and to an upcoming exposition on water, which is opening in the Architecture Centre Amsterdam (ARCAM) on July 8th. The pilot is a collaboration between ARCAM, the Municipality of Amsterdam, the Waternet water board, the University of Amsterdam ATM team, the AdamNet foundation of Amsterdam libraries and heritage institutions and the Amsterdam University of Applied Sciences.

Amsterdam is so famous for its canals that it has consistently been dubbed the ‘Venice of the North’. As the city has always been living in alignment with water (and hence with water-related problems), the history of water can be a broad subject to cover. Therefore, we chose to focus on four major pillars. First of all, we looked at the physical infrastructure of the surface waterways. People who have gotten to know Amsterdam by reading a map must have been drawn to the main canal belt. Most of these canals date back to the 17th century, when the city was undergoing major developments. Some of the canals are even older, while other historic waterways like the Damrak have been filled up and now compose our city’s main walking paths. Amsterdam is not just assembled by the canal belt; earlier maps of the city show even more the importance of water in Amsterdam. The 1560 map by Jacob van Deventer, for example (here on the right), displays the central role of the river Amstel. So, by compiling a chronological assembly of historic,  water-focused maps (in a way inspired by Topotijdreis), a timeline of the developing water infrastructure can be revealed.

For the pilot, the 3D Amsterdam team at the Municipality of Amsterdam creates a thematic version of Amsterdam’s “digital twin”, focusing on Amsterdam’s waterways as they took shape over time. This 3D environment allows us to visualize the constantly varying water levels, in addition to the historical 2D maps which show the waterways from a birds-eye perspective. Before the development of the Oranje Locks in 1872, the water levels in Amsterdam were, via the IJ, influenced by the tides of the Zuiderzee. Ebb and flow influenced the water circulation in the city, but the city board tried to control this circulation as well. Around the year 1670, for example, they started the renowned project of building the (still existing) Amstel sluices. The need for such regulations on the flow of the city’s water resulted in an abundance of archival material that the City Archive of Amsterdam (SAA) encloses, including handwritten records of historic water levels. To add this historic aspect, the team of 3D.Amsterdam created a time slider, which will be included in the thematic 3D environment. Together with our German colleagues at the UrbanHistory4D project in Jena and Dresden, we experimented with the implementation of their workflow for employing photogrammetry for the virtual recreation of historic buildings in 3D. To test the workflow, we first focused on the Maritime Museum (Scheepvaartmuseum) using a 3D model from the 3D BAG. Afterwards, I created a rough model of the no longer existing Marine Palace, which stood near the Maritime Museum but made way for the IJtunnel. The building would have been located in the IJ, which becomes visible with the time slider (see the screenshot of the test case). 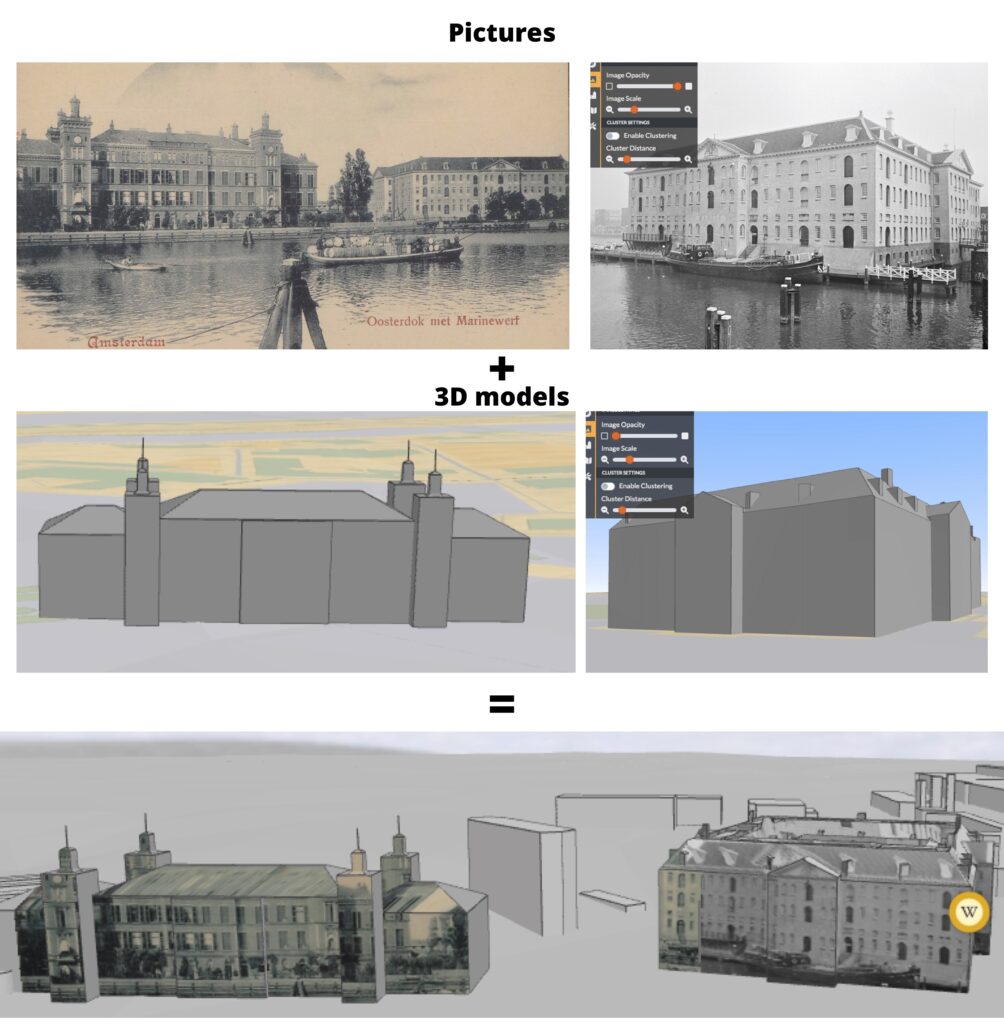 A third focus area will be the economic value of the waterways. Nowadays, living in the canal belt is more in demand, and therefore more costly, than living in other areas of Amsterdam. Has this historically always been the case, or has the value of living near the waterways changed over time? A comparison can be made between modern value taxes, as found in data from the woningwaardekaart, and historic value taxes found in, for example, the 1832 cadastral data or the verpondingskohieren from the 17th century. The creation of these interpolation map layers is still in development, but once completed, these maps might be a valuable addition to the thematic 3D environment that provides insights into the longitudinal development of the value of living around water in Amsterdam.

At last, we try to bring the story of water quality into play. 16th and 17th Century Amsterdam is known for many great things, but also because of its horrific smell. Emperor Karel V wouldn’t dare to drink the surface water in 1540, Olfert Dapper wrote about the rotting smells of the canals in 1663, and Joannes Hudde developed a revolutionary system of sluices in 1682 to control the bad smell of the waterways. This system was, according to Gerrit ten Sande, already forgotten in 1765, which is why he recreated the formula to ‘finally’ get rid of the everlasting smell from the waters. In 1847 Samuel Sarphati started a collection service for feces so that they would not be thrown into the canals anymore. In 1921 both the first wastewater treatment and the first separated sewer were built, but the last house to quit discharging directly into the canals only did so in December 1987. The more recent history of water can be visualized by photos and videos, which can range from showing dirty, trash-filled canals to children now swimming in clean ones. We collected these visualizations and the most representative ones will be shown in the exhibition, opening on the 8th of July in ARCAM.

Student in the Master Urban and Architectural History, University of Amsterdam and student assistant at UvA-CREATE for the Amsterdam Time Machine Project